Coming out in 1958, the original Impala is as iconic now as it was then. The captivating look of it still manages to turn heads today. The individual taillights swooped over by the protruding fins and the signature convertible stylings make it instantly recognizable. 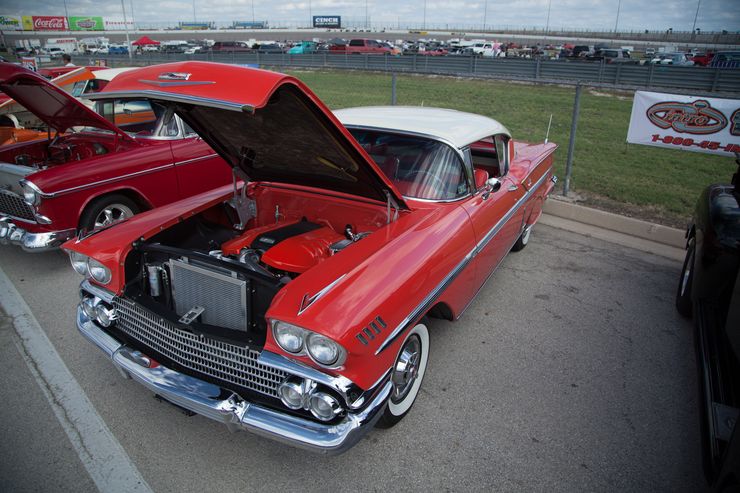 Originally starting life as a high end Chevy Bel Air, this model, coupled with it’s reasonable price tag, helped improve the sales of Chevy putting them at the number one spot for this financially tough year. And, the Impala spawned a class of fans that are as passionate today as they were nearly 60 years ago.

The First of Many Facelifts

The original Impala lasted only a year before the designers had another go at the car's exterior styling. Adding an extra inch and a half to what was already a remarkably long car, Chevy designers also made some dramatic changes to the Impala's rear end, clustering what were originally three individual lights into a cats-eye at each corner. Conjoining the two tailfins at the center of the trunk, the contours of the roof and other panels could flow in a space age styling that is quintessential American automotive design of the period.

Along with these major styling changes, customers were given the option of buying either the original two door coupé and convertible or a new four door sedan. The engines stayed the same with this incarnation as they were in the previous model, offering the choice of and in-line 6 cylinder or two options of the more powerful V8. The larger of these, the 348 Turbo-Thrust, gave the car the power that would be fitting of its namesake African animal, offering in the region of 315hp. This model was also the first of many to be a distinct Impala, throwing away the shackles of the “Bel Air” model that it was previously known by.

Introduction of the SS

As the third generation came about in the early 60’s there was a much more conservative feel to the styling of the car. Sticking with some of the flowing lines and contours on the side, the ornate protruding tailfins were no longer a feature of the car, giving it a much squarer, yet still quintessentially American style. The engines were given some treatment as well, with the largest being a 409 V8 capable of 380bhp. This would also be the first time that the world was introduced to the Super Sport, or SS version of the car, laying the way for future American Muscle cars.

The Last of the Classics

In ‘65, Chevy brought out what would be seen as the last “classic” Impala before safety restrictions and demand would dictate the future of this vehicle. This offering would again tone down the stylings of the car but still kept some of the original Impala charm, the tailfins for example still remained but were remarkably smaller than those on the original. The Sports Coupé would now look how you would imagine most muscle cars from this period looking. Aside from the more middle-of-the-road style, there were some surprises in store for the fans: The taillights had been separated from the clusters that previously housed them, looking more like the Impala’s of old. Yet again the engines has been sized up, and Chevy brought out the now iconic 454 Turbo-Jet big-block engine.

This would be a standout year for Chevy, as the new Impala would set a new record for the number of cars sold in a year, topping over 1 million. A record that, to date, hasn't been beaten.

This generation would have a few cosmetic changes made over its 5 year reign, with the new “coke-bottle” stylings of the ‘67 Impala being the most remarkable, making the car much more streamlined and looking slightly reminiscent of the original models. Looking from the side on as if the frame for the roof has somehow become sunken under the tailfins. 1970 saw the last of this generation roll off the production line ending on high sales figures and a reputation for comfort and a surprisingly roomy interior.

From here, there would be many ups and downs for this icon of American motoring, but it is nice once in a while to look back fondly at where it all began and how it has helped shape the future of the American car market.