Vintage Chevelle Ads From the 1960s: Part I

Vintage advertisements take us back to a simpler time. A time of sunsets, beaches, ladies with scarves on their heads, and almost humorous (unintentionally) and awkward catch phrases -- but we still love the old school Chevy ads. Here's a collection of some cool, some odd ball, and all memorable Chevelle ads from the 60s. 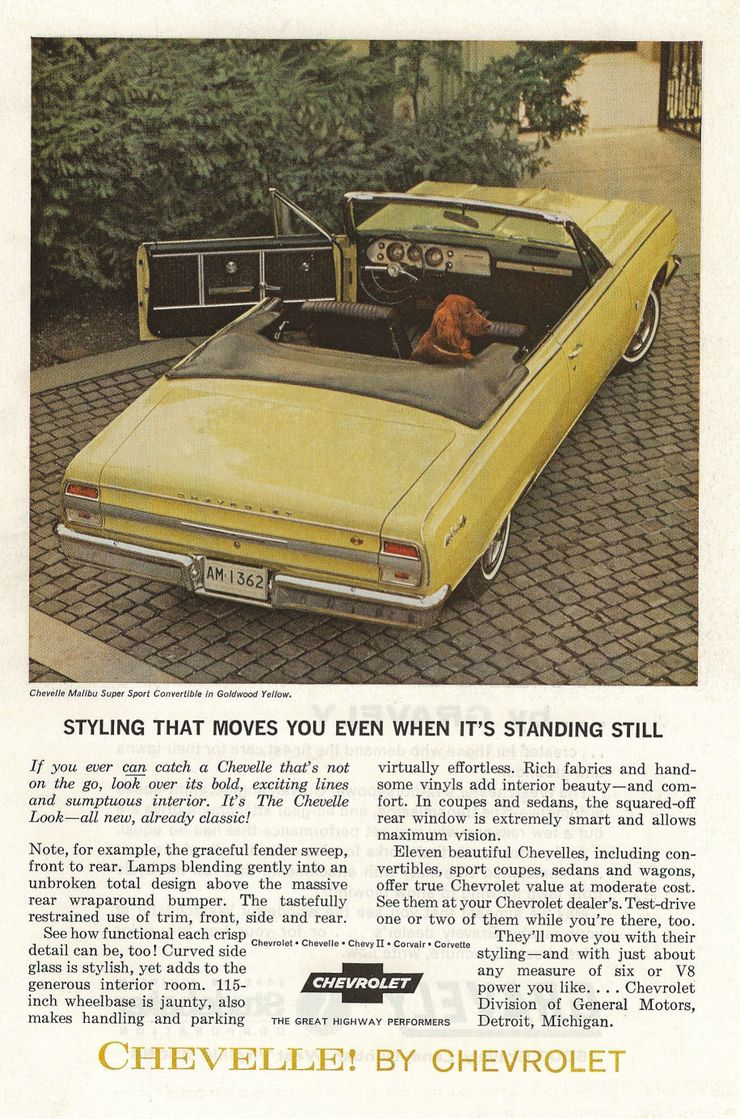 “Styling That Moves Even When It’s Standing Still”

Quite a catchy headline for this ad for the first model year of the Chevrolet Chevelle. This ad is referring to the stylish, flowing lines of newest addition to the Chevy family.

The dog for one, he looks puzzled -- perhaps he's watching his owner take off after someone trying to steal the paper (again!)...and he took off too fast to close the door. This ad is also incredibly descriptive and poetic, they just don't write them like they used to! 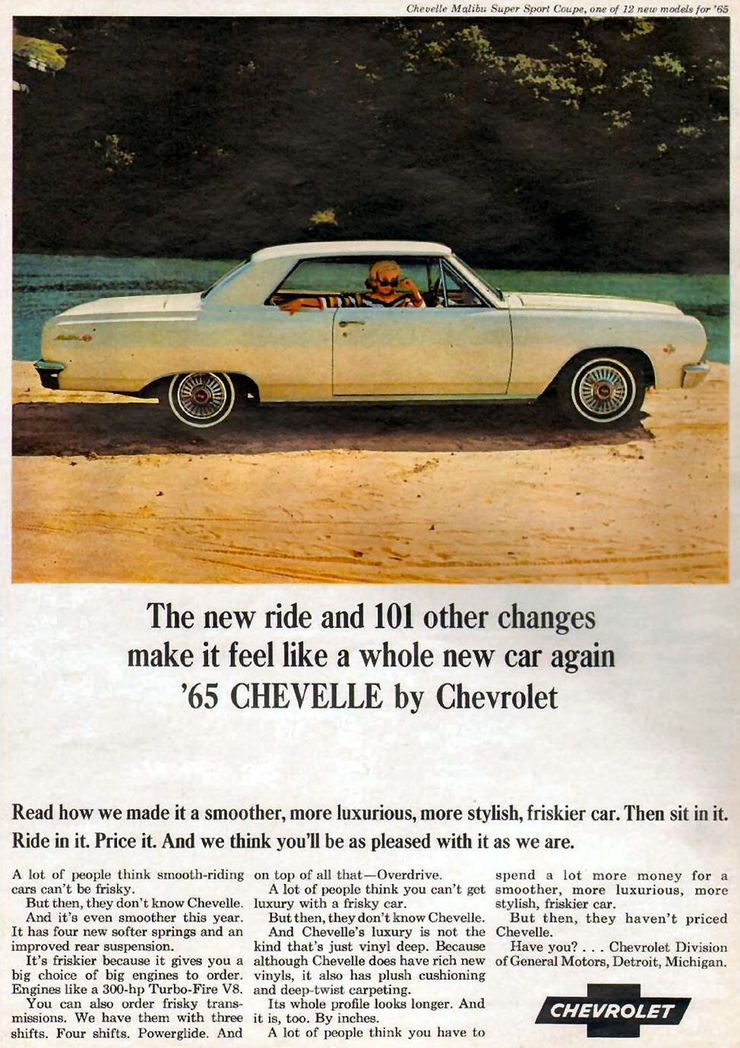 "The New Ride and 101 Other Changes Make It Feel Like a Whole New Car Again: '65 Chevelle by Chevrolet"

For year two of the Chevelle, this lengthy headline outlined that a lot was going on with the 1965 model.

Another ad with a mysteriously missing driver, much like the dog ad of 1964. It's also one of so many "cars by the water" style ad of the time -- the theme seemed to carry throughout print ads for decade. 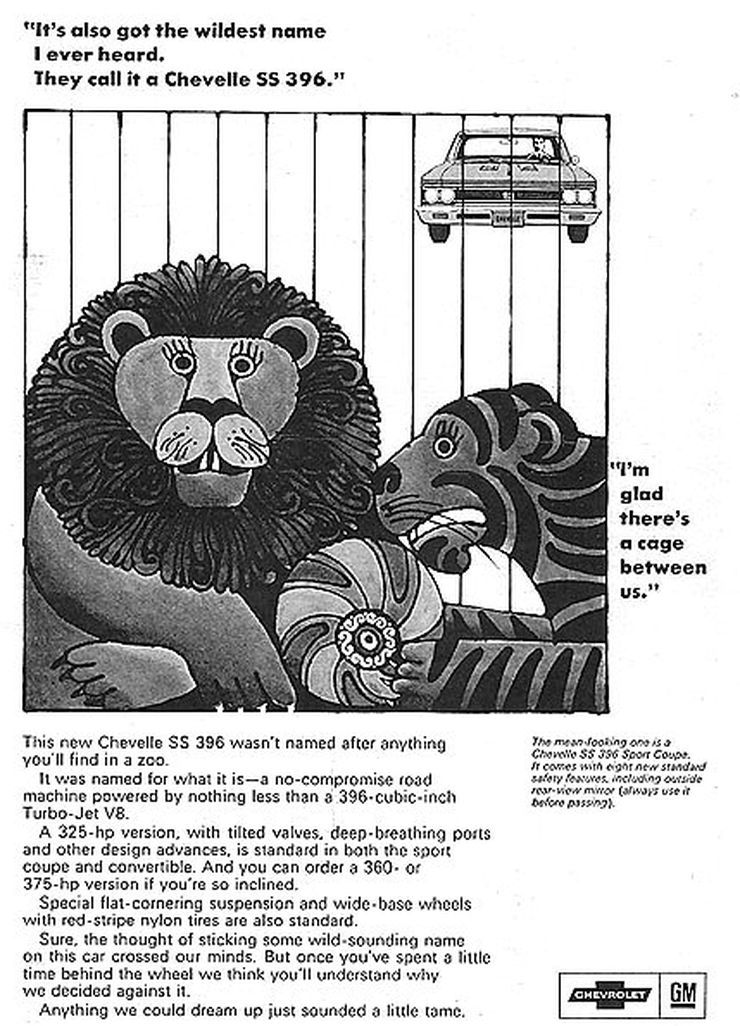 "It's Also Got the Wildest Name I Ever Heard. They Call it a Chevelle SS 396"

And here we find the Chevelle in its natural habitat...at the zoo scaring lions and tigers (who are curiously caged together, bad call).

Where to start? The presence of zoo animals is a little strange, and the illustration technique itself is definitely indicative of the era. This ad is one of the most odd-ball ones we could find -- but at least someone is manning the wheel this time! 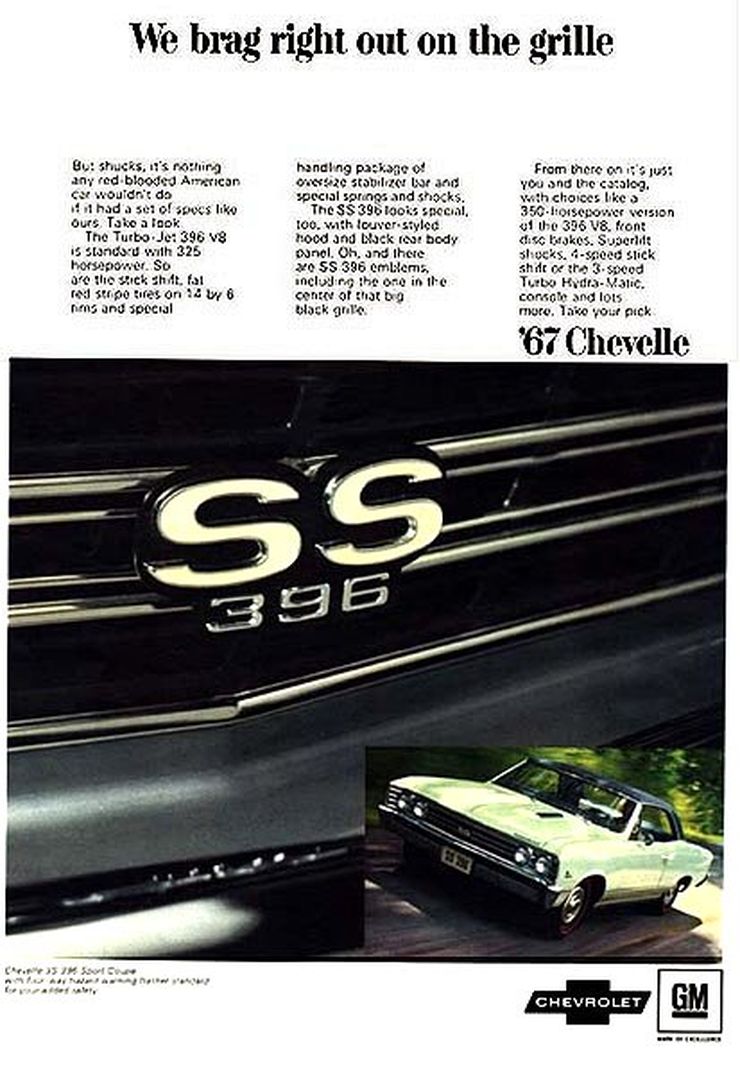 "We Brag Right Out on the Grille"

This print ad gives an up close look at the iconic Chevelle grille and gives us a run down on the power train for 1967.

It's like a jock flexing his muscles. The "in your face" approach with the grille and awesome shot of the Chevelle in the corner makes this one of the coolest ads we found. 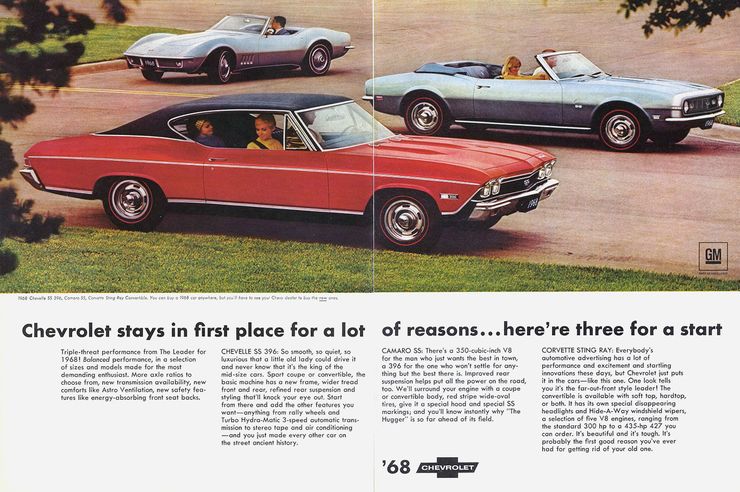 "Chevrolet Stays in First Place for a Lot of Reasons...Here're Three for a Start"

Chevy had some major bragging rights in 1968 when the Chevelle, Camaro, and Corvette where all playing for their team.

Everything. At first glance, the sleek metal cars and crisp road are exciting, but there's a lot more going on here than you notice right away. Notice how Chevrolet seems to layout the lifestyle expected to go along with each car? Not to mention that the content of the ad tells us exactly why each car is the best in its class. 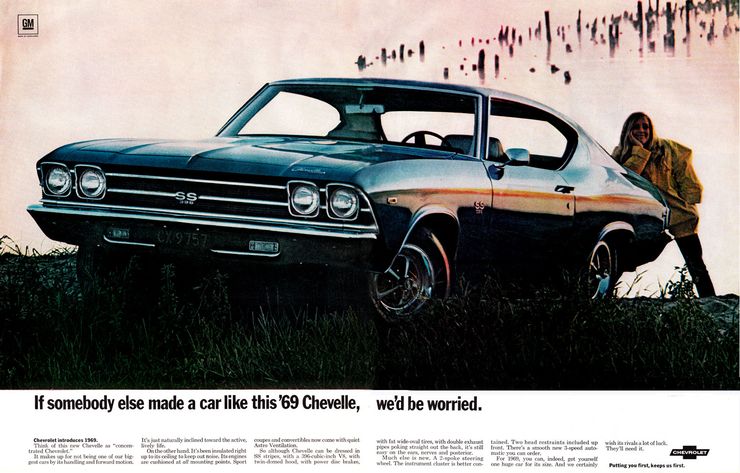 "If Somebody Else Made a Car Like This '69 Chevelle, We'd Be Worried."

A statement that outlines how the Chevelle was like no other, and no other car has been able to fill its shoes since. Going on for production for another 8 years, by 1969, the Chevelle was at full blown icon status.

This ad has a bit of romanticism about it, because let's face it, Chevelle owners loved/still love their car!

Do you have a favorite Chevelle or other vintage ad to share with us? Let us know in the comment section below!