Since we had such a good time bringing you some of the coolest, oddest, and most unique ads by GM for the Chevelle in the 60s, it’s time to post some more. Plus, there were a few we wanted to include in the original post and couldn’t fit in. Here’s part two of the most notable 1960s Chevelle print ad campaigns.

This black and white advertisement introduces the new performance Chevelle as a car that could park next to a luxury car with no shame.

It reminds us that it wasn't always about performance - which is pretty much the cornerstone of every car made today. Even the most high end luxury cars anchor on providing massive amounts of horsepower as part of the package, but once upon a time, those two elements didn't co-exist. 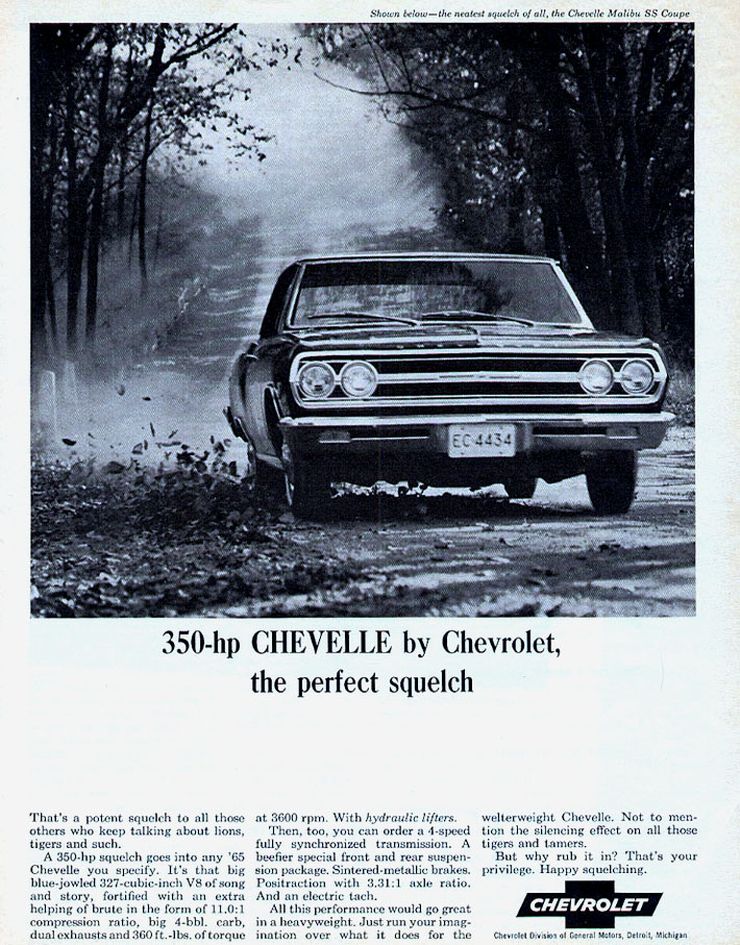 Now here's a headline aimed right towards the gear heads. It throws the horsepower out there right away - Chevy knows what muscle car drivers want!

The use of the word "Squelch" for one. That's a word you definitely have to look up when you see it. The photography and setting, mixed with the black and white print, would make a pretty cool poster for the wall of your garage. Also, who's driving? 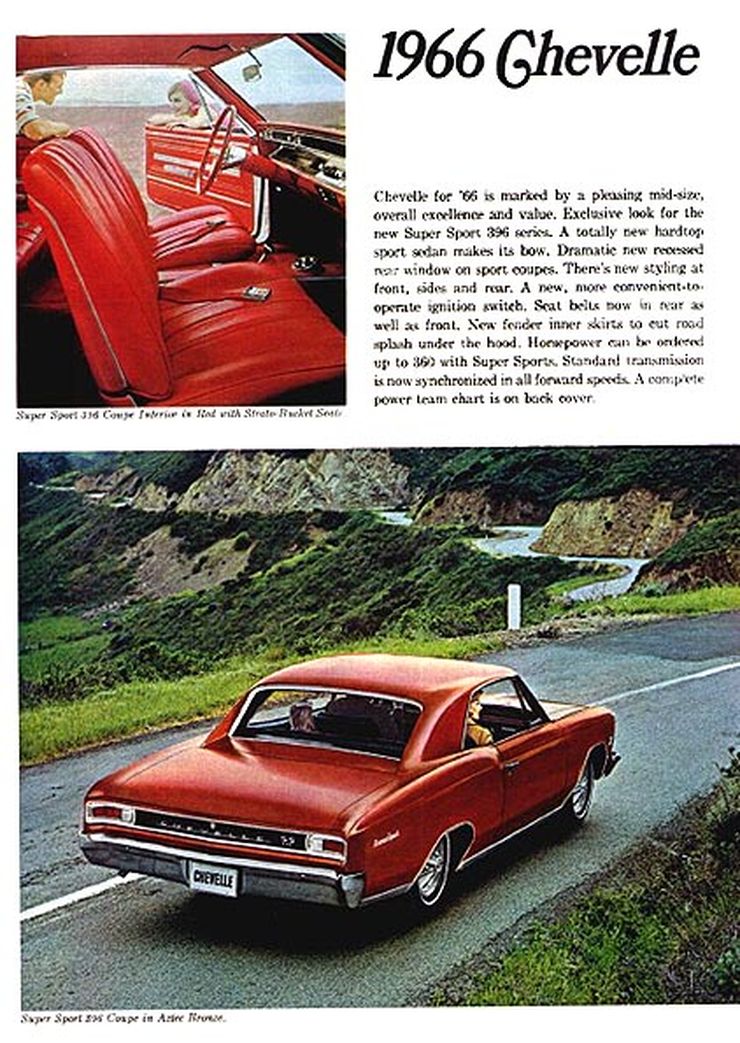 This simple ad lays it out there for us, why we should love the ’66 Chevelle.

This ad gets straight to the point and tells readers all about the Chevelle without any catchy headlines or slogans. The highlights outlined in the text include the addition of rear seat belts, new inner fender skirts, and an exclusive look for the SS 396. 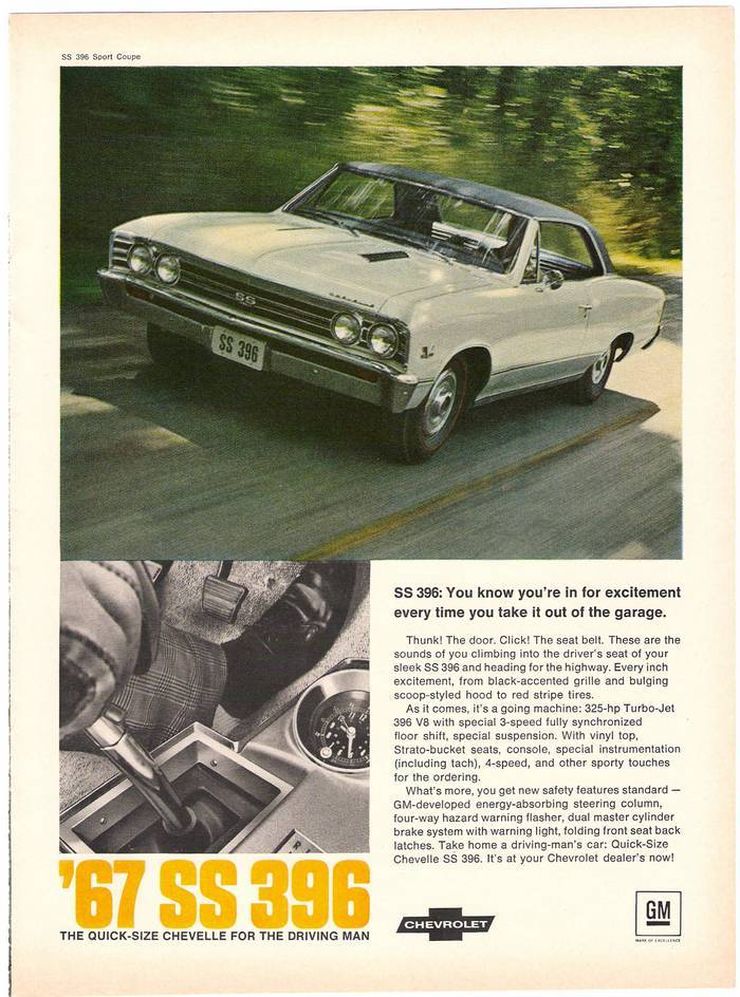 “SS 396: You Know You’re in for Excitement Every Time You Take it Out of the Garage”

That’s a pretty compelling statement, and it still holds true to this day!

This may be one of the coolest ads on our part II list! The wording, pictures of the driver mashing the gas and holding on to the shifter, and of course the shot of that amazing piece of machinery known as the ’67 Chevelle SS 396. 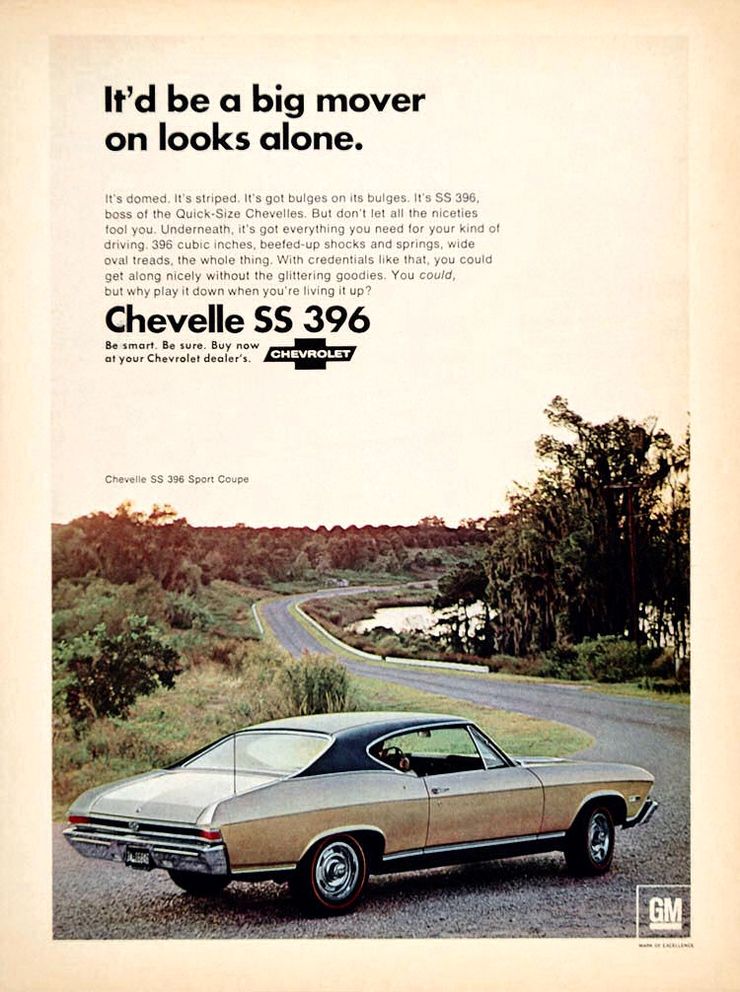 “It’d be a Big Mover on Looks Alone.”

It sure would! This ad for the Chevelle SS 396 tells you to “Be smart. Be sure. Buy now…”, and with this car, it wouldn’t be a hard sell!

This is a straightforward piece of advertising that inspires emotion with both words and photography. The compelling text tells us all about the looks, performance, and how much better your life would be with a Chevelle. This statement is backed up with a picture of the Chevelle and the open road ahead. 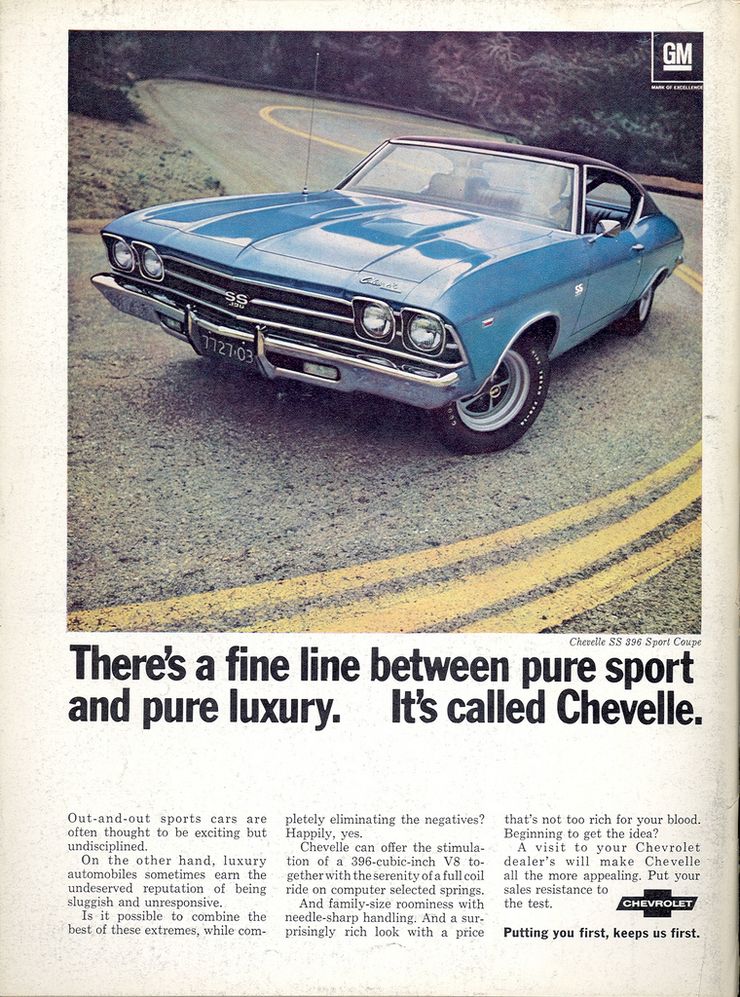 Much like the first ad on part I, this ad touches on the luxurious characteristics of the Chevelle while holding onto some mean performance.

The sharp angle of the corner carving Chevelle SS inspires the inner gear head in all of us. While the text goes on to describe the reasons the Chevelle can play in the luxury class, the picture alone is enough to have us pining for the days when the muscle car ruled the road!

Did we get them all this time? Don’t forget to revisit part I to see some more of our favorites!